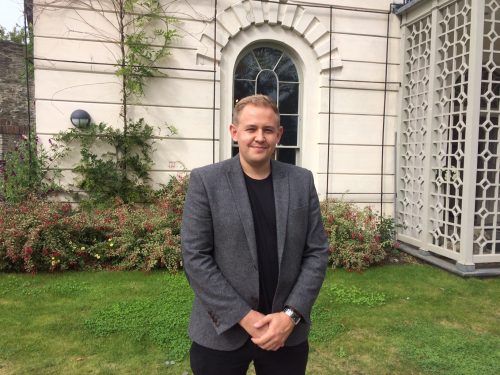 Cardigan Castle has had a record-breaking summer with visitor figures at their best ever.

More than 7,500 people visited the castle during the six week summer holiday period – up 2,000 on last year’s numbers.

Add in the successful events co-produced with Theatr Mwldan – ranging from a four day comedy festival to top dub band Dreadzone, African guitar poets Tinariwen, Catrin Aur plus Claire Jones and the American Youth Harp Ensemble – and more than 10,000 people have made use of the castle this summer.

On top of that, in the wake of the Restoration of the Year win, the site’s five star accommodation has been fully booked with the diary already filling up for next year.

Now the castle has announced the appointment of a new director – Newcastle Emlyn-born Jac Owen Davies who has been brought in to steer the castle to even greater heights.

Jac, who has a background in the civil service and hotel management, has joined the castle from his role as director and general manager at the pro Rugby League Team London Skolars. Before that he was chief executive officer at the London Welsh Centre.

A first language Welsh speaker, he will be returning to live in the area with his wife and two children.

The role has been funded by an HLF Resilient Heritage grant with Jac’s role to secure the castle’s future sustainability.

Jac said: "I'm delighted to be joining Cardigan Castle at this exciting time in its history. The existing staff and trustees have developed an excellent product that's a real asset not only to Cardigan but to west Wales as a whole, I'm looking forward to getting started on helping take the castle to the next level and to ensure as many people as possible benefit from this incredible site."