A project to “lift the spirits”

Cardigan Castle has won Channel 4’s Great British Buildings Restoration of the Year beating off competition from all over the UK.

The castle – which won the Georgian category in episode one – took the crowning accolade in the final episode screened last Thursday evening.
Judges from the Royal Institute of Chartered Surveyors described the castle project as “lifting the spirits” and “brilliantly done”.

The castle – which opened two years ago following a decade long campaign by Cadwgan Trust – won against such formidable opposition as Mount Stewart in Ireland, Lews Castle in Scotland and Henry VIII’s Hampton Court Palace.
The win has been greeted with delight by locals and visitors alike.
Cardigan mayor Cllr Clive Davies said: “This is fantastic news, this accolade really takes our castle to a new level of exposure and will no doubt make Cardigan and its castle a destination this summer and future years. Great for our shops, great for our local economy. Well done everyone involved!”

And Cadwgan chairman Non Davies said: “This is a tremendous honour for the Castle, Cardigan, Ceredigion and all those involved in the Restoration project.
Winning the overall title of Restoration of the Year in a competition involving some very prestigious projects is testimony to the hard work put in by the local community over many years and the high standard of the work undertaken. We are very proud of the site – it shows what can be achieved in a small rural community with commitment, dedication and determination. We look forward to welcoming visitors from near and far to the “Restoration of the Year” over the coming months.”

Lead architect Niall Phillips of Bristol-based Purcell, who has been involved with the project since 2005, said: “Who would have thought a small charity with not a penny in the bank could rescue an utterly derelict Castle and bring it back into a vibrant sustainable new use, now perhaps more important for Cardigan than it has been at any period in its history? At Purcell we are so proud of our role in helping and guiding the Cadwgan Trust and our delight at the Castle’s success is a great reward!”

Castle facilities officer Sue Lewis – who was screened being told the result – has had to keep it secret since she was filmed with presenters Kevin McCloud and Dr Anna Keay back in January.
“I am so relieved it has finally been made public. I have been going around with a huge internal grin for weeks. When we were told the castle had won I was literally struck dumb. My overwhelming feeling was one of justification and delight for all the hard work put in over the last 15 years. Cadwgan Trust and the castle have done Cardigan and Wales proud,” she said.
“When I watched the programme I couldn’t believe the opposition we were up against. If I hadn’t known we were the winners I would have been very worried indeed!”

Picture: Castle staff and present and former Cadwgan trustees plus Ceredigion chief executive Bronwen Morgan celebrate the Restoration of the Year win outside the castle walls. 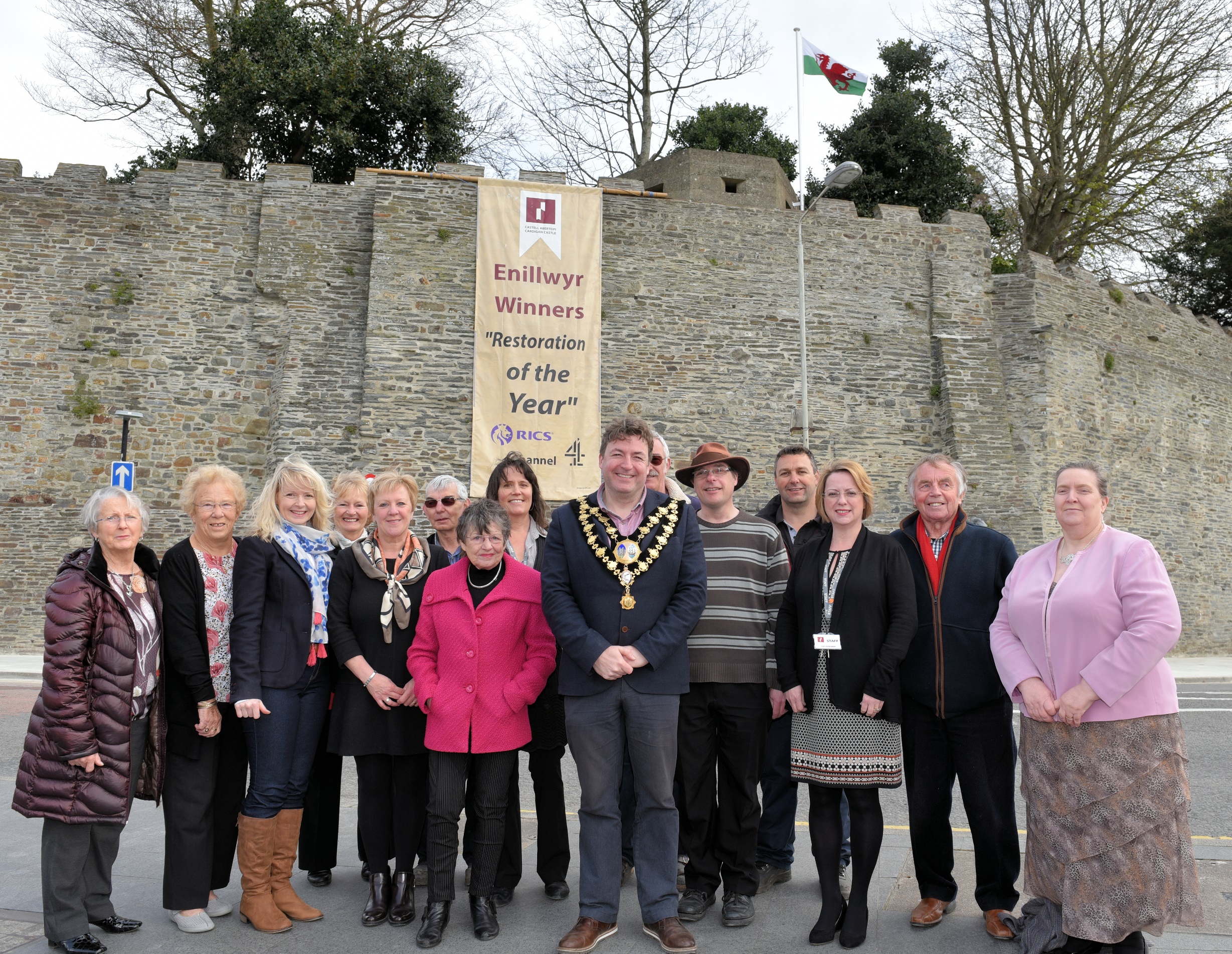